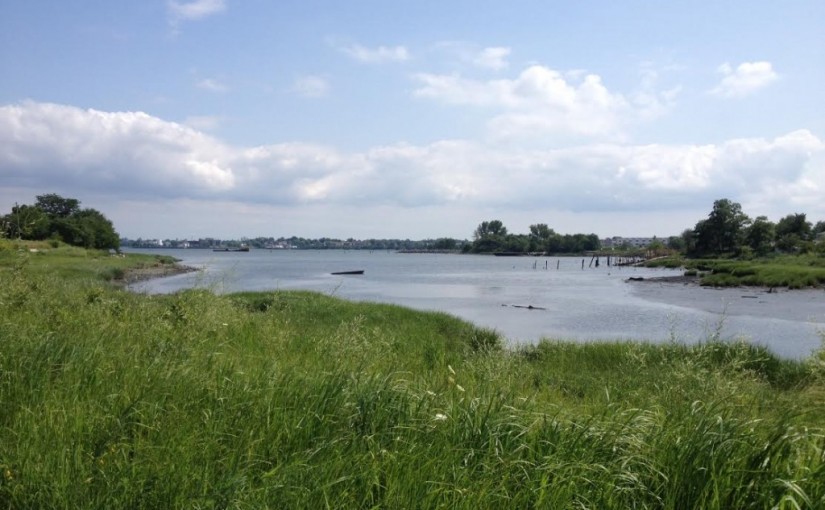 This morning DNAinfo.com put out a list of what they deemed the five best places to going hiking within New York City limits. While Pelham Bay Park on the list, it was disappointing, considering our borough has more park space than any other. I’ve created a diverse list of trails, some off the beaten path (literally) that you can enjoy.

Here are more trails that you can walk and bike on in our borough. An added bonus? At least two extend past the Bronx border into Westchester County!

Castle Hill conjures images of the 6 train, the Cross Bronx Expressway, and J-Lo. To the casual passerby, there is no indication that there is a waterfront paradise just beyond the bend. Just past Castle Hill Houses, the avenue reaches a dead end, there’s a brand new YMCA. Adjacent is a development of prefab houses sporting above-ground swimming pools with pristine gardens.

Quickly make a right onto Hart St. and continue until you reach the intersection of Howe and Barrett Avenues. You look out onto an inlet leading to Long Island Sound, resembling a  beachside town in Cape Cod more the Bronx. This is not a place you’ll want to speed by on your 10-speed Schwinn.

With breathtaking views across the Sound, it’s an excellent spot for a small picnic lunch. Watch as planes swoop down en route to nearby LaGuardia Airport. After your lunch, continue onto the adjoining Pugsley Creek Park, with its vast swampland. Ultimately, you will stumble upon Harding Park, a small working-class enclave lined with bungalows. The sleepy fishing neighborhood is a stark contrast with surrounding Soundview, which seems worlds away…just the way they like it.

Getting there: a 20 minute+ walk from the 6 train Castle Hill Avenue station or Bx22 bus to the end. You’ll probably want to go via bike, if you’ve got one.

After visiting Castle Hill Park and Pugsley Creek, it makes sense to mosey on across the peninsula to Soundview Park. The park goes on further south, but it makes sense to exit at Stephens Avenue. Heading west on O’Brien and Leland Avenues, the entrance trail to the park begins.

Much bigger the adjacent ones, Soundview Park sits snugly along the Bronx River where the East River meets. One special spot you don’t want to miss is the jetty the juts out just south of the trail. Bring your camera, because you’ll be treated to sweeping views of the Whitestone Bridge and Manhattan skyline. Looking to either side, you just might see small schools of fish swimming alongside.

Added bonus: if you have access to a canoe or kayak, there’s a launch ramp. As you walk northwest, the park offers a sneak peek of Hunt’s Point Riverside Park. Large boulders at the riverbank where you may want to sit and just watch the world go by. This spot offers a great vantage point form which to observe a sunset.

Getting there: depending on where you enter the park, 6 train at Elder Avenue, Morrison-Soundview Avenues, or St. Lawrence Avenue, which 20-30 minute walk or ten minute bike ride. The Bx5 and Bx27 buses also stop a short distance from the park.

This one is a diamond in the rough. You’ve probably never heard of it. Heck, nay people in the neighborhood haven’t even heard about it. Okay, so you can’t really take a hike in here.. You may in fact spend more time hiking to get there than you will once you’ve arrived. Still, this tiny park will be of interest to any hiking or history buff.

It’s lacking the love. Friend of the Woods, a volunteer group, has spent years cleaning up this neglected nook. However, it never quite took and has been referred to as “a municipally protected disaster.”  The issue might be that while recognized as a NYC park, University Woods is essentially a small forest. If that doesn’t deter you from visiting, nothing will.

It is located off of a very desolate stretch of Sedgwick Avenue. Behind Bronx Community College and its Hall of Fame for Great Americans, University Woods takes its name from the days when New York University occupied the campus before abandoning it in the early 1970s. It played a part as a fort during the American revolution.

Getting there: Bx12 Select bus to the Cedar Avenue stop (opposite Dallas BBQ) and walk south on Cedar. Or take the Bx3 bus to 183 Street, walk west until you reach Sedgwick Avenue, and south a few blocks.

This isn’t just a hiking trail, but also history lesson. A very ambitious trailway and somewhat complicated, this one is my favorite. The actual trail itself extends only about 26 miles, as the urbanization of Manhattan and the Bronx obliterated much of it.

The Old Croton Aqueduct starts at the Croton Reservoir in Croton-on-Hudson, NY, a town 28 miles north of the Bronx in Westchester County. It ultimately ends underneath what is now Bryant Park and the New York Public Library. Built in the 1830s and 40s, this tube extended from the then-countryside to New York City, carrying clean water to its residents. Working on gravity, the elevation difference pushed the water down the an incline. While you can no longer see any remnants of the aqueduct in Manhattan, signs of it exist in the Bronx.

While it’s difficult to tell where the aqueduct trail begins, one could theoretically start at Highbridge Tower at Sedgwick Avenue, just above West 170th street. Working northeast to University Avenue— MLK Blvd. for a stretch — where it zigszags. It begins to reveal itself with telltale landmarks, most notably a defunct gatehouse at Phelan Place. Several blocks to the east, on Burnside Avenue,  is where the actual trail begins, though more of an urban pathway.

Recently reconstructed by the NYC Department of Parks & Recreation, the rail continues north alongside the aptly named Aquduct Avenue, continuing across Fordham Road. Frustratingly, the path ends abruptly several blocks north when you hit Kingsbridge Road. This is where things get a bit murky. Jerome Reservoir is the last landmark for several blocks until Van Cortlandt Park.

From there, it becomes progressively easier to follow the trail north. The caveat is that because the population of adjacent municipalities grew rapidly after the aqueduct was built,  the trail sometimes breaks off an an intersection and isn’t completely evident. A stretch of Yonkers Ave., just above the Bronx, is a good example. New York State Office of Parks has posted a hand drawn map of the Westchester County segments, should you desire to venture to points north. Biking can be a challenge in areas due to terrain, which is alternately rocky and muddy.

Getting there: there are various points of entry. Decide what segment of the trail you want to explore. The Bx3 is useful for points along University Avenue, while the Bx 11 and Bx13 will take you deeper into Highbridge. Generally, the 4 train is your best bet, as it runs parallel. For points northwest of Jerome Park, the 1 train is best. Should you decide to venture beyond city limits, the Hudson Line of Metro-North is rarely ever more than a short walk. Friends of the Old Croton Aqueduct provides a full history, information about tours, and other resources.

Like the Old Croton Aqueduct Trail, the Putnam trail is rich in history and extends past the city line. As you may have guessed from the steel girders at the entrance, the Putnam Trail is follows the former New York Central Railroad‘s Putnam Line. It began at 155th Street in Manhattan, crossing the river, stopping at Sedgewick Avenue station in the Bronx.

Stretching some 40 miles into Putnam County, this trail is best accessed via Van Cortlandt Park. It can be muddy with puddles after rain or snowstorm, a fact that was the catalyst for the city to consider paving it. The quality of the trail vastly improves upon entering Westchester, covered in blacktop, a terrain much easier on bicycle tires. More straightforward than the Aqueduct Trail, historical signage, maps, and narratives adorn the trailway at the sites of former stations.

Getting there: 1 train Van Cortlandt Park, but the Bx 9 will also take you there. However, running through the middle of Westchester and Putnam counties, train and bus lines can be few and far between, and increasingly less frequent in service the further north you go.

Beginning at the Kensico Reservoir and Dam in Valhalla, NY, it ‘s possible to hike or bike . The trail is largely paved, but includes dirt paths in wooded areas. The added bonus is that if you have one, it’s possible to kayak or canoe (or even swim, as the Baron Ambrosia did last summer, though it’s highly recommended that you don’t) the length of the Bronx River into the East River.

This is the quintessential #BronxCentric nature trail, which cuts through over a dozen parks and includes historical bridges, and landmarks. What’s especially noteworthy is that the Bronx River passes through two major Bronx cultural institutions, the New York Botanical Garden and Bronx Zoo. Along the riverbank, one can observe the snuff mill of the former Lorillard Estate, as well as various forms of wildlife, which the garden has produced a PDF guide to.

Perhaps one of its best features is the various waterfalls that adorn the river. My personal favorite is located at River Park on East 180th Street, just south of the Zoo. The fairly recent Concrete Plant Park utilizes old industrial parts of defunct factories to create a unique vibe all its own. Another must-see is the peaceful Hunt’s Point Riverside Park, that incorporates artistic touches, which giving it an eclectic flair. The river is at the cleanest its been in decades! The Bronx River Alliance hosts various events, which you can check out on their website.

Getting there: the 2 train north of the Cross Bronx expressway, the 6 train to Whitlock or Elder Avenues south of the expressway, and various bus lines (see the MTA bus map of the Bronx.)

Update: 7/21/2014, the jetty in Soundview Park is currently inaccessible due to construction. Check www.nycgovparks.org for current conditions.