By now, we’ve all read about— and hopefully tasted! — the sublime cuisine of Thailand, Mexico, or India. You know what cuisine doesn’t get enough love? Colombian food! Even among Latin American countries, Peru, Cuba, and even Argentina still get higher billing. I can’t understand why. 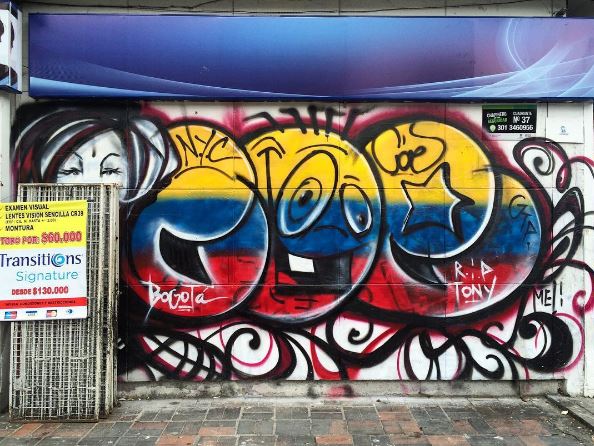 What is Colombian food?

Over the past decade, Colombia has been coming into its own as a travel destination. Visitors are always delighted to learn how varied the South American country is in climate, topography, and culture. The nation of 48 million has some of the most biodiversity on Earth. It’s possible to go from sweater weather to sitting on a beach. In one day. On a flight shorter than your morning commute. This lends itself to some interesting culinary variety.

I’ve enjoyed a hot bowl of ajiaco on a chilly Andean day, engorged on a hearty plato montañero in the coffee region, and feasted on a fresh red snapper with coconut rice in steamy Cartagena. The topography, biodiversity, and cultural influences are so eclectic that you’ll find amazing food in every region.

My story begins in Bogotá, the Colombian capital 8,500 feet closer to the stars, as an early millennium tourism tagline proclaims. Whenever someone finds out I lived in Colombia, he’ll often comment about “how hot it must be.” I smile knowingly.

Bogotá’s average temperature is 58° F (14° C), and it’s grey and rainy much of the year. It’s much more reminiscent of October in New York City. Or Ireland anytime of year, which shares a similar temperature and dampness. A far cry from the rainforest or beach (it’s landlocked), Bogotá has your quintessential sweater weather.

In the morning, there’s no better way to start the day than with a thick hot chocolate. But don’t mistake their hot chocolate with that powdery Swiss Miss mix. Colombians prepare their hot chocolate with bitter dark cocoa, milk, and sugar, giving it a frothy consistency. The liquid is drunk with a slice of soft, salty cheese similar to mozzarella. Wait…did you say cheese? Yes, the sweetness of the chocolate goes well with the savory cheese in this unlikely pairing. 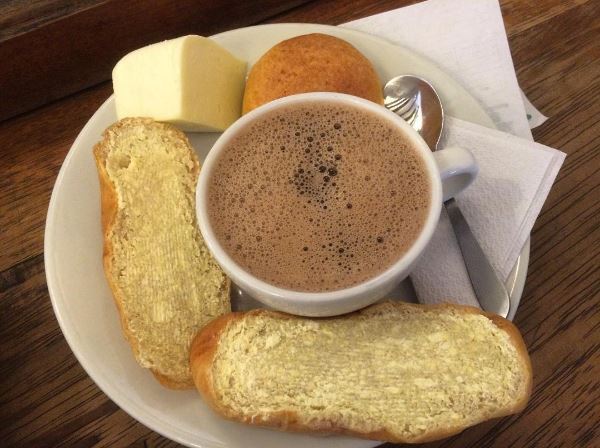 Another breakfast favorite of bogotanos and people of the Cundinamarca/Boyacá departments is changua, a milk and egg-based soup. Some people love it but I’m not one of them. Don’t let me prevent you from enjoying it!

One soup I do love to eat is ajiaco. Due to its time intensive preparation, it’s often served as a special in restaurants outside the capital. That’s why getting a piping hot bowl of it in Bogotá is a must. The soup’s base includes three varieties of potatoes, corn still on the cob, chicken, and cilantro. 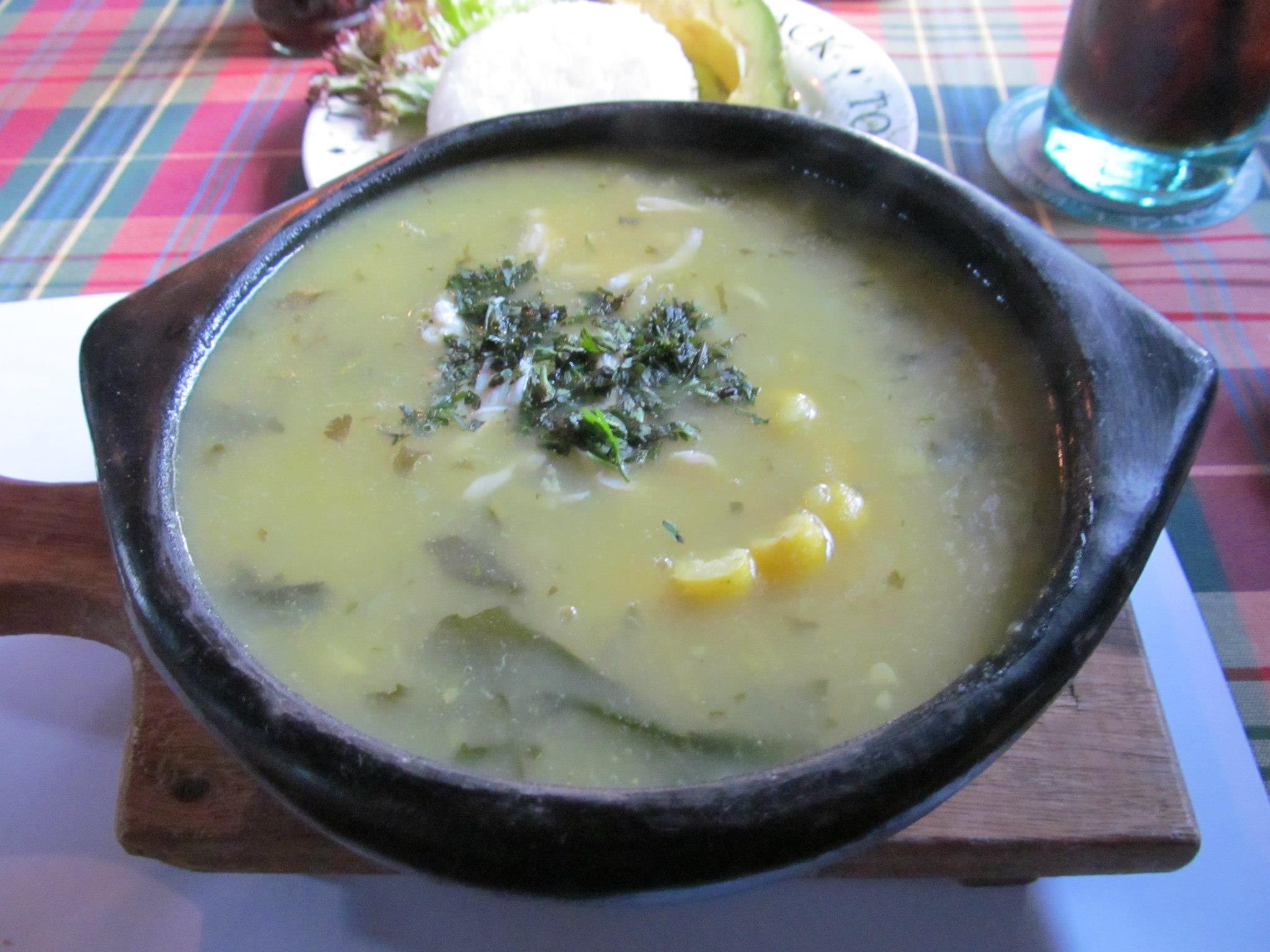 A warm bowl of delicious ajiaco

However, what gives ajiaco its unique taste is guacas, an herb. Guascas are sparsely found in grocery stores outside of Colombia, making the soup that much more special. I’ve made it a few times and have had to hit the streets of Jackson Heights, Queens to specialty stores that carry it. Once ready to eat, it’s served with salty capers, avocado, and white rice. Some people like to add a wallop of sour cream to it. Any way you slice it, it’s delicious and worth the time it takes to find or prepare it.

We can’t talk about Bogotá without mentioning cañelazo. It’s a hot drink made with aguardiente, an anise-flavored spirit, brown sugar, and boiled water. Though not uniquely Colombian, it’s drunk in other Andean countries where the climate tends to be cooler, each variety a bit different. Some people like to add fruit juice to it. I like mine from a glass with a sugar rim. It’s also common to add a lime for flavor or perhaps a cinnamon stick.  Best enjoyed on a cool evening overlooking the city, cañelazo is common café and bar menu item in Bogotá.

Despite my love for all things Bogotá, my absolute favorite Colombian dish originates in the Coffee Region. The Coffee Region includes Antioquia, where Medellín is situated, and smaller departments, Caldas, Risaralda, and Quindío. A paisa is somebody from that region. Juan Valdez is a paisa.

The worst kept secret of that region is their famous plato montañero, also known as la bandeja paisa. Plato montañero translates as “mountain plate” from which it originates (though it’s piled as high as a mountain.) Others affectionately refer to it as heart attack on a plate. I’ll let you be the judge.

I could eat this everyday, but my waistline would pay.

This protein and carb-heavy platter was intended to feed field workers who picked and grew coffee. Eating one plate almost maxes out your daily caloric intake. The affair involves grilled steak — which, in some cases, is substituted with ground meat — white rice, red beans, chicharrón (fried pork rind), avocado, sweet plantains, an arepa (we’ll get to this later), and in the traditional version, chorizo. All topped with a fried egg.

The plato montañero is considered Colombia’s national dish. For that reason, you’ll find it on menus all over the country, and occasionally in an Ecuadorian or Peruvian restaurant in the States due to its popularity. Paisas are very serious about their food. Don’t be surprised to find magnets, t-shirts, and artwork depicting the dish in craft markets and gift shops. 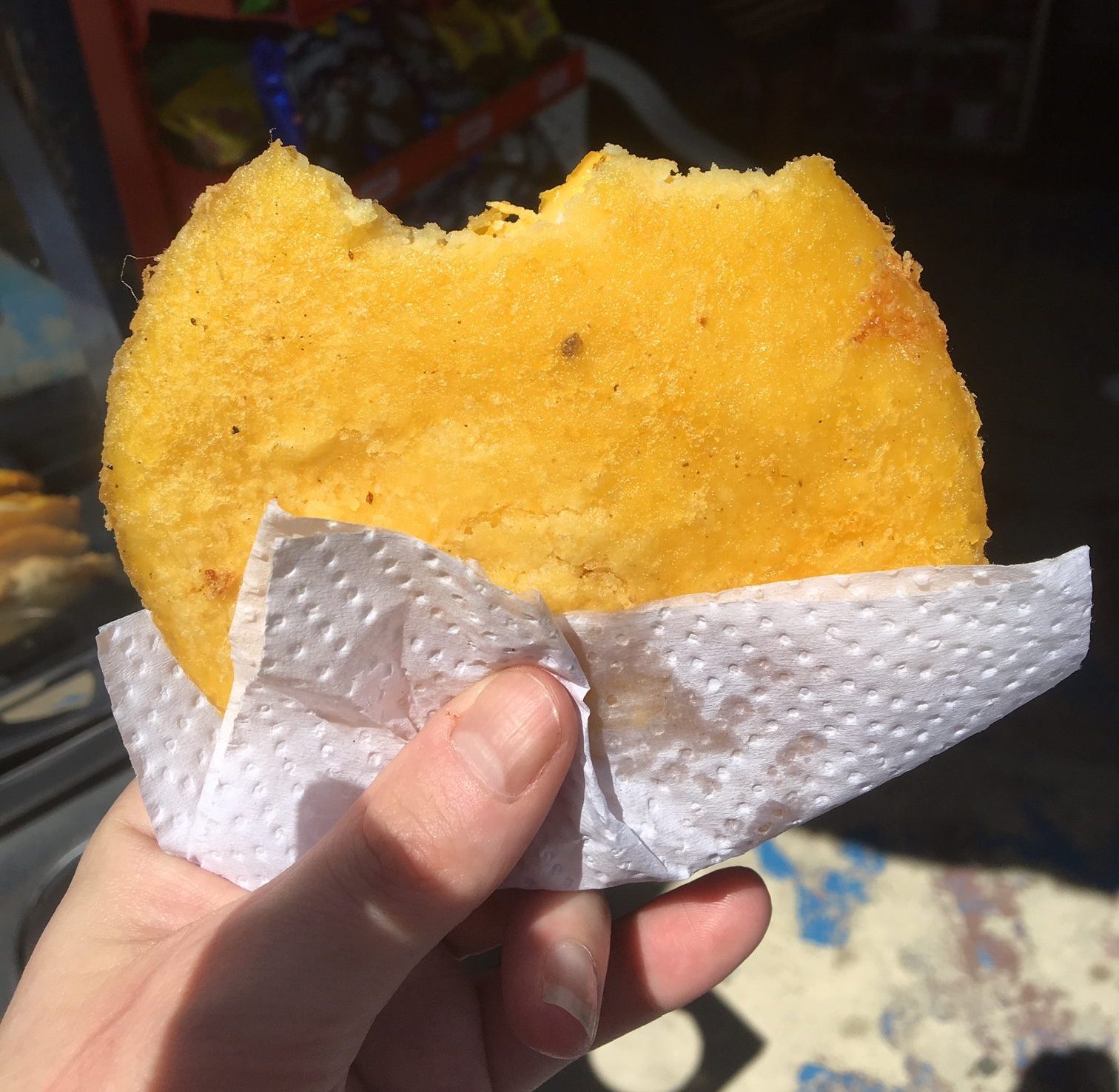 Which came first, the arepa or the egg? In case you’re wondering how they get that egg inside there, read on!

Indigenous in origin and made of cornmeal, arepas are the quintessential Colombian staple. An arepa is to Colombians what bread and butter is to Europeans. Walk around any Colombian city and you’re sure to encounter somebody peddling them. You’ll see them grilled, baked, and fried, made of yellow or white corn, plain or with cheese, and in cases, stuffed with fillings like meat or chicken. The permutations of this street food vary greatly depending on region. Some of the more common varieties are arepas de choclo, arepas de queso, and arepas de huevo (more on that later.)

An arepa de choclo is easy to spot. With its bright yellow color, it has a sweet taste, similar to cornbread, with kernels still intact. Sometimes a salty white cheese may be added to the mix for a gooey treat. In New York City, these have become common place at street fairs and carnivals sold as “mozzarepas“. Don’t mistake these with the similarly sized arepa de queso, which is white and more starchy than sweet. You might compare it to a Salvadoran pupusa in taste.

You’ll also see the arepa rellena, a stuffed arepa — an arepa sandwich, if you will. Arepas rellenas are disputed territory. They’re huge in both Colombia and Venezuela, albeit, prepared slightly differently. These are made with the white corn type, grilled or fried on a skillet, then cut down the middle. You’ll find them stuffed with shredded meat, chicken, even plantains, cheese, or beans. Increasingly, you’ll find Venezuelan-style arepa shops cropping up around Colombia. Regardless of what side of the border these originate on, Colombians and Venezuelans can both agree that arepas are life.

A arequipe waffle at my favorite Colombian chain, Crepes & Waffles.

One thing I always overindulge in whenever I stumble upon it is arequipe. Americans call it caramel, Argentinians call it dulce de leche, and Mexicans call it cajeta. Whatever you call it, it’s a sweet treat. It’s a simple confection to make with milk and sugar, sometimes with a touch of vanilla for good measure. Colombians use arequipe on ice cream, on cakes, and in pastries. A favorite among street vendors, sold in plastic containers, as well as clay jars. Arequipe may just be Colombia’s answer to Nutella.

Where there’s smoke, there’s fire. Similarly, where there’s arequipe, there are obleas. You can pair the thin, disk-shaped wafers together to create a “sandwich,” usually featuring arequipe as the filling. The combo of the wafer and arequipe is similar to a Dutch stroopwafel. You can even get yours with coconut flakes, sprinkles, or peanuts.

A dessert that I’ve never seen outside Colombia is cuajada con melao, or cheese curd with sugar cane syrup. Like hot chocolate with cheese, it sounds like an odd combo but it’s delicious. The cheese you’ll need for it is difficult to find outside the country, but you can use a soft, white cheese like mozzarella, queso blanco or queso fresco as a stand in. The cheese is then drenched with sweet sugar cane syrup. I had this homemade on a farm in the countryside. !Qué delicia! 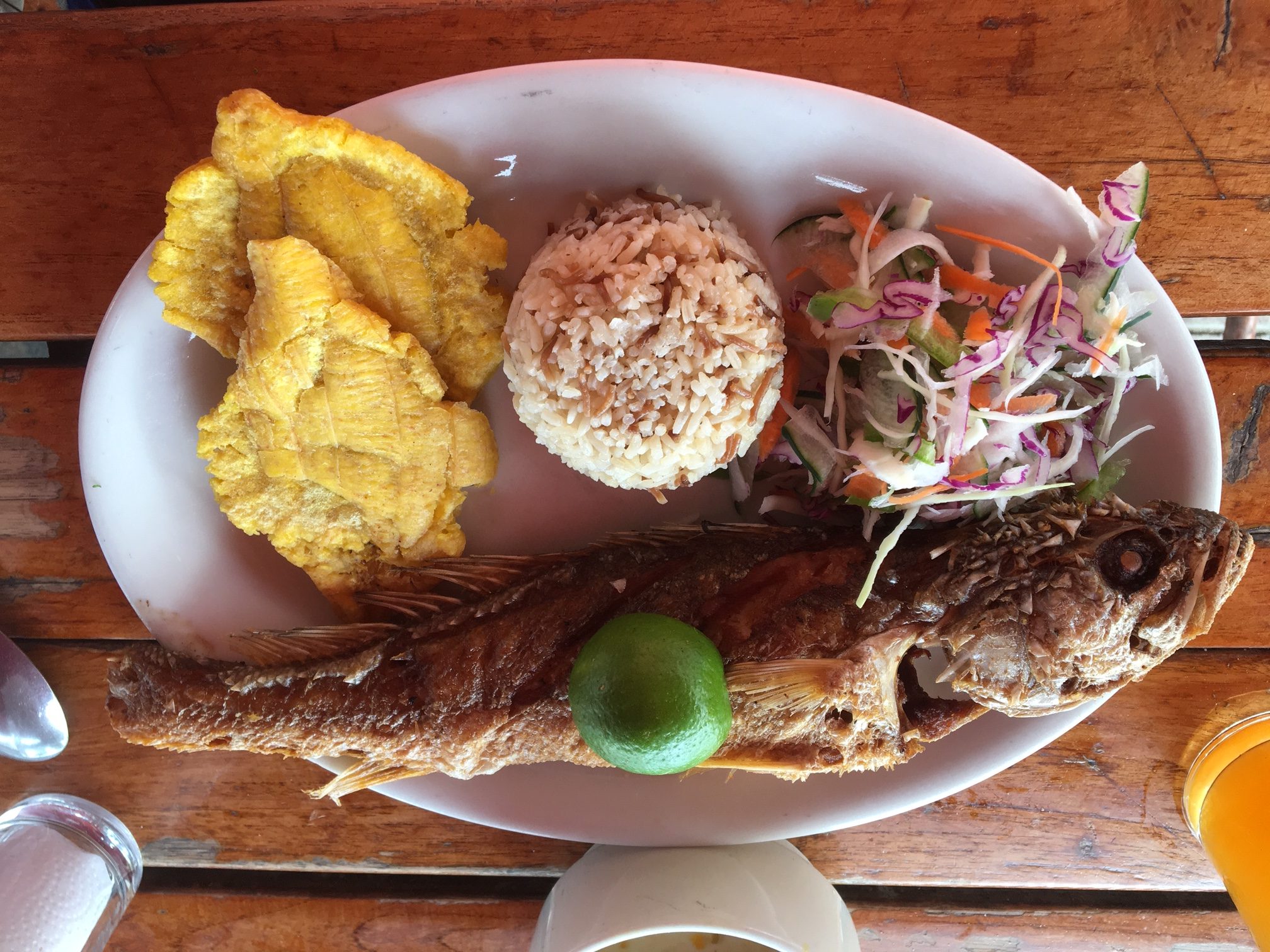 What could be better than eating this on the beach?

If the Coffee Region’s signature dish is el plato montañero, the Caribbean Coast’s may be pescado frito (fried fish.) Seafood is the name of the game in cities like Cartagena, Barranquilla, and Santa Marta. This dish transcends class, as you’ll find it on the tables of beach shacks and top rated restaurants alike. The salt water fish is typically mojarra roja (tilapia), or sometimes pargo rojo (red snapper.) The fish is fried whole —head included – until it’s crispy, and served on a bed of sweet and savory arroz con coco (coconut rice.)

Getting back to arepas, for a sec. To the uninitiated, the arepa de huevo is a mystery. Unique to the Caribbean coast, this ultimate street food features a fried egg. How exactly do they get the fried egg into the arepa? These arepas are fried in oil, removed from the heat, and sliced down the middle. Once the incision is made, an egg is dropped inside the pocket, and fried again. It’s tricky to prepare but makes for a crispy, if greasy snack. Spice things up with a touch of ají, Colombian hot sauce.

While you’re at it, beat the scorch of the coast and grab yourself a cold glass of aguapanela, Colombia’s answer to lemonade. Here, as in most of Latin America and the Caribbean, you’ll find limes instead o lemons. Take the juice and sweeten with hardened sugarcane, and ta-dah! Easy and delicious on a hot day.

In essence, you cannot generalize Colombian food; it’s like sampling the cuisine of several countries at once. Though some of these food items can be elusive in the United States and Europe,  it’s worth hunting down a Colombian restaurant or grocery.

2 thoughts on “What You Need to Know About Colombian Food”