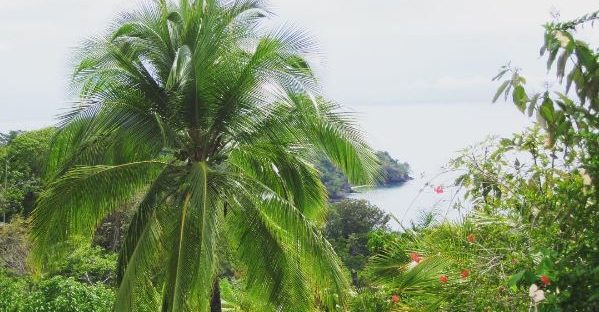 Have you ever been to a place that didn’t live up to its reputation?

I have a confession to make: I didn’t love Costa Rica. When I travel, sometimes a place can go from being very mundane to sublime in just a turn of a corner. This was not the case. I know it’s on most young Americans’ bucket list, but it missed the mark for me.

Maybe it was because my introduction was crossing the border on foot. Or that a boy  had to give me a ride in his bike basket due to traffic to and from Costa Rica effectively halted from the the Swine Flu. Or perhaps it was the part where the only ATM in town on the Costa Rican side of the border was out of cash. Or that my only saving grace was a benevolent taxi driver who drove me to Liberia with the understanding I’d pay him once we arrived. It could have been the crappy hotel room (quite literally) complete with a toilet bowl full of contents from the last guest. But it appeared to be the only game in town upon arriving in Quepos well after dark.

Those details aside, though I was sparsely traveled prior to my trip, it seemed as though everything I saw, ate, or experienced while there was mediocre at best. I’d moved back to the States from Colombia just two years before and had always heard rave reviews about the beaches, rainforests, and relaxed pure vida vibe Costa Rica exuded. Regardless of what you’ve read or heard, Colombia is a very hard act to follow in terms of biodiversity, culture, food, architecture, and history. But this is not a story about Colombia, so I digress.

Upon arriving in Liberia, that fateful taxi driver took me to an ATM where I paid him $50 USD and waved down a Puntarenas-bound bus, which swiftly whisked me away. After being so discombobulated, dusty Puntarenas seemed like a good place to catch my breath, buy a snack, and plan my next move. I was sweaty, a bit disheveled, but ultimately reached my destination of Quepos by nightfall. Upon arrival, I scrambled to find a hotel and some food before turning in for the night. Rather than a destination, Quepos seemed like a place to crash and break out of as soon as possible. My plan was to head out  to Manuel Antonio Park in the morning and look for better lodging. 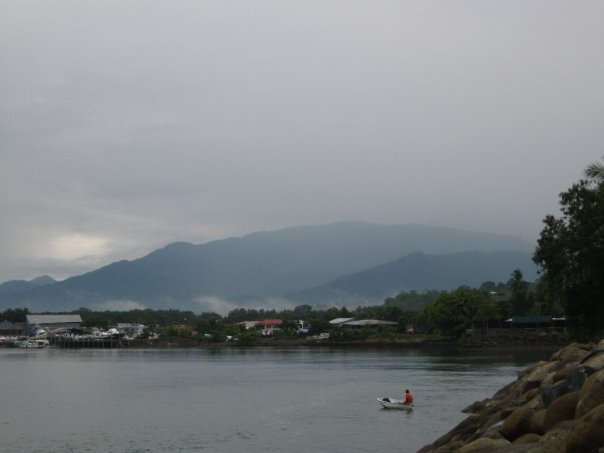 A foggy morning in Quepos.

Leaving was less than smooth, as it seemed there was nobody at the front desk to give my keys to. Finally, somebody appeared as I was about to deposit them in the lobby. I grabbed an unremarkable breakfast (actually, most things were unremarkable, as I recall my time in Costa Rica) in town before making the 15 minute mini bus ride to Manuel Antonio. Lucky for me, I found a large air conditioned hotel room at a dead end across the street from the beach. After checking in, I stashed my luggage (what little I had) and rushed out the door to the park.

Maybe it was overall bad luck, but within less than 5 minutes of paying the admission and entering the jungle-filled park, my camera died. This was before Instagram and high-quality phone pix were a thing, so I was out of luck. The walk through the lush greenery was pretty, if uneventful, as I could hear monkeys but couldn’t see any. I spent about an hour swimming in the clear, aqua water and enjoyed the scenery I’d seen in travel magazines and guide books, then headed back to the hotel. That was probably a highlight of the trip. Despite this, after hiking (and getting lost) Parque Tayrona in Colombia, where you’d (used to be able to) walk miles without seeing a soul (that’s a whole other story…), Manuel Antonio felt like a watered down version with more people than wildlife. Walking down narrow paths among crowds posing for photo ops every 10 feet is not my idea of becoming one with nature. Maybe I’ve been spoiled.

After leaving the park, I took a long walk up a hill, enjoying the view of the ocean below, stumbling upon an iguana and a cat-sized monkey on the way. By this time, I’d replaced my batteries and got a few decent shots in. That was about the extent of my animal encounters. After, I walked back to the beach and bought myself a can of cola y ron, a novelty for this then-twenty-something from New York, where public drinking is illegal. 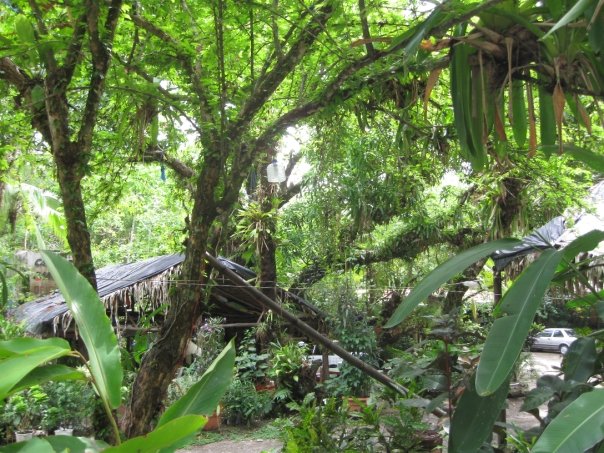 Full disclosure: I speak Spanish, so my experience was probably different from that of somebody who was relying solely on a phrasebook (those most ticos – the nickname for Costa Ricans – speak some English, as the country has become a tourism powerhouse.) I struck up a few conversations with locals as I frolicked in the water. At times, it felt as if I were a voyeur, hearing the Spanish of the locals mixed with the loud English of the visiting Americans and Canadians, nursing their fifth piña colada. The main drag was lined with souvenir stalls hawking tacky Pura Vida t-shirts and touristy restaurants complete with burgers and pizza, English menus, and waiters enticing gringos with their liquid lunch specials. It felt kind of like a slightly less campy Playa del Carmen or Cozumel at times, sans the Senor Frog’s or Margaritaville.

I know what you’re probably thinking: Manuel Antonio is so cliché and I didn’t really see Costa Rica.

The very next day I returned to Quepos and got a bus to San José, hoping to see the “real” Costa Rica. Upon arrival, I immediately felt struck by ambivalence. While neighboring Nicaragua has the jewels of Granada and Léon, and Panama has the emerging, en vogue Casco Viejo barrio of Panama City, many people would be surprised to know that Costa Rica has virtually no existing colonial architecture. While the city was small enough to be walkable and boasted some nice parks, it felt more like a big town than a capital and wasn’t particularly attractive. Most buildings were modern and the streets and plazas dirty. I was warned against lingering at the infamous Coca-Cola bus terminal (which, despite better judgement, I got a haircut in for about $3 USD). Downtown I also found a good used bookstore and bought a few travel books.

I quickly got bored of San José, so I figured out how to catch buses to nearby Cartago and Heredia. While more scenic and quaint, these towns too lacked much architectural charm or draw. In most of my travel experiences, I’d stumble upon something suddenly and think, “This is where the magic begins…” In Costa Rica, I kept waiting for that moment to happen, but alas, it never came.

Not a Foodie City

Even the food was rather underwhelming. Gallo pinto, which is shared as the national dish with neighboring Nicaragua, is pleasant enough and hearty, but gets very tired after eating it everyday. While I recall washing down refreshing Toña beers in Léon’s evening heat, no particular beer or liquor was anything to write home about on this side of the border. While everything was technically pleasant, no particular food or drink really stuck out to me like, “Wow, I’ve got to go look for this when I get home.  Not that there are an abundance of Costa Rican restaurants in New York City.

Overall, no particular food, drink, city, or neighborhood resonated with me. I never felt like I ever got a real dose of Costa Rica’s culture or history– not something I could grasp onto that felt uniquely Costa Rican that I’ve not since experienced or felt in other countries. But my life philosophy and mantra is Have no regrets. In that sense, I wasn’t too disappointed, as I’d had few expectations or comparisons to make to it at that point. I’ll let you be the judge.