Truth be told, I would not necessarily suggest somebody make a special trip out to Larkin Plaza unless you are an urban planner, transportation buff, and/or architecture lover. The park is very small and more of an example of what urban planning could be at its best than a true tourist site. That said, there are a few reasons to linger if you find yourself missing a bus or waiting for the next train. 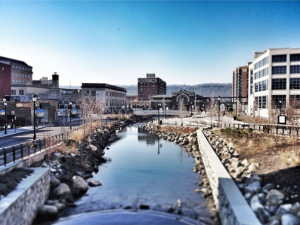 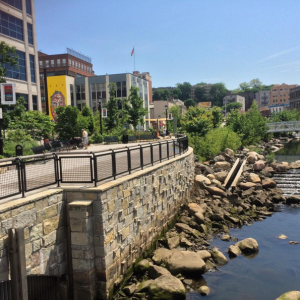 In the mid-1990s, the city of Yonkers decided to go back to basics: it tore up a huge parking lot at Larkin Plaza and in a process known as “daylighting,” reveal what was underneath the concrete prior to it even existing: the Saw Mill River. In doing this, they added a few waterfalls, a small promenade complete with benches, a footbridge across, and a fish ladder (we’ll get to that in a minute!) 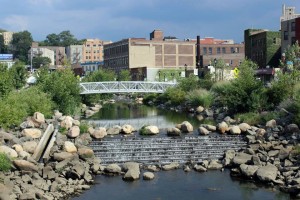 This is a great place to kill a few minutes and just watch life go by. One think that is interesting about this park is that you’ll notice new, shiny signage alongside the now-exposed river with fun picture and photos depicting the wildlife you’ll find here. That includes carp (and some rogue koi), eels, several bird species, and wild plant life. If you lean over the footbridge or stand at either far ends of the park, you’ll notice mammoth blue fish swimming below that measure 2-3 feet long (!) 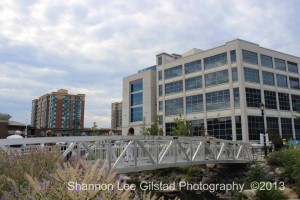 What you’ll also notice is an odd metal piece along side a waterfall leading down to the main pool that feeds into the Hudson River. There are some mosaics of local wildlife built onto the promenade and on any given day, you might find a surprise, such as a bench or street lamp with a “sweater” woven around it, as I did one summer afternoon. 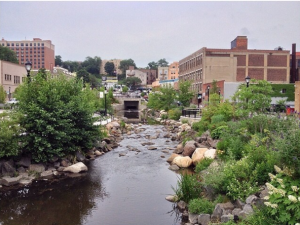 city that is often described by words like “decay,” “abandoned,” and “troubled,” Van der Donck Park is the gateway to revitalization, as can be seen in the small restaurants cropping up and buildings being rehabbed on surrounding streets. In fact, the Larkin Plaza model has been such a success that last year the city broke ground on two nearby streets to further expose the river underneath, using the land as future sitting parks.