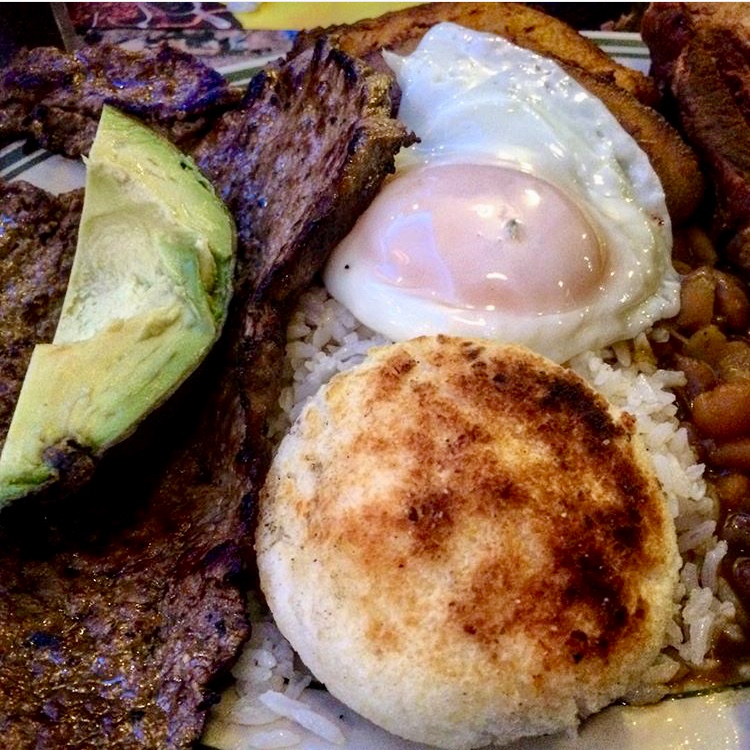 If you order a flan for dessert, you’ve got all of your food groups covered.

More and more, however, Colombian restaurants are beginning to crop up in unlikely corners of the city (Park Slope, Brooklyn and Morris Park in the Bronx, for example.) Over the years, I’ve tried most of the Colombian restaurants in the city and definitely have my favorites. Though this list is far from exhaustive and very Queens-heavy, I’ve compiled a few of my favorites.

As of a few months ago, it seems like Tierras Colombianas has permanently closed.

Los Arrieros Restaurant
76-02 Roosevelt Ave, Jackson Heights, NY 11372
Situated on the corner of the bustling Roosevelt Avenue, diners can feel the rumble of the 7 subway line overhead. This tiny eatery has a limited amount of tables and fills up fast. If you’re just arriving or leaving from the neighborhood, this is the perfect place to hole up with a warm sancocho. Double take: if you’re a foreign film cinephile, this place may look familiar. That’s because it appeared in a scene of the riveting 2004 blockbuster, Maria Full of Grace. It was good enough for María.

Pollos a la Brasa Mario
Various locations
Any Colombian living in New York City has eaten at a Pollo Mario. This no nonsense diner-style restaurant covers the bases when it comes to Andean Colombian food. If you can’t pronounce the name of the dish, just point to the photo or the number on the menu. There is a small chain in Queens, with some locations as far flung as New Jersey and Long Islands. Bonus: many locations are open late, if not 24 hours. The hearty soups and rice is the perfect ending to a night out.

Colombia in Park Slope
376 5th Avenue Brooklyn, NY 11215
This is a standout among the dozens of restaurants and bars along Park Slope’s well-heeled 5th Avenue. This narrow restaurant leads to a garden out back where you’ll want to sit on a warm day. The menu contains all of the usual suspects. However, Colombia boasts a full bar and you’ll want to try one of their happy hour specials. I recommend the Colombian mojito, a riff on the classic but with aguardiente in place of rum.

The Empanada Spot (formerly Mama’s Empanadas)
Various locations
More of a take-out place, here you’ll get to sample the Colombian-style empanada in its various forms. Unlike empanadas from other Latin American countries, Colombians use corn-based masarepa instead of flour for the dough and fry it instead of baking it. You’re left with a bright yellow, piping-hot empanada. Here you’ll find your run of the mill beef and queso variety, but Empanada Mama takes it a step further. With choices like rice and pigeon Reggaeton, a nod to Puerto Rico, you’ll also find savory flavors like the arequipe y queso, my personal favorite. The possibilities are endless.

El Fogón Costeño
109-12 Northern Blvd, Corona, NY 11368
Fogón is a wildcard. In a borough full of Andean Colombians, this place is unique in that it serves food from Colombia’s Caribbean Coast. Hidden away in plain site, the restaurant is a hole in the wall on Corona’s bustling Northern Boulevard. It’s a rare treat to find an arepa de huevo or coconut rice, no less butifarra in these parts. Bob to the cumbia and vallenato sounds of Colombia’s coast while tasting your way through the region.

Stop Here for a Drink…Or Two

D’Antigua Bar & Lounge
84-16 Northern Blvd, Jackson Heights, NY 11372
D’Antigua – or simply “Antigua,” as it’s called by regulars – has been around for well over a decade. About 15 years ago, a blossoming young Colombian musician going by the name Fonseca performed here before an intimate audience. Today he’s one of Colombia’s biggest stars. Stepping into D’Antigua feels like being in a dark lounge somewhere in Chapinero or La Candelaria. Here you’ll find rockeros nursing a beer while nodding to Soda Stereo or artsy college students listening intently to a poetry reading with one of the venue’s signature cocktails in hand. Rock en español fans will fit right in. Party the night away and make new friends at this rock-centric stronghold.